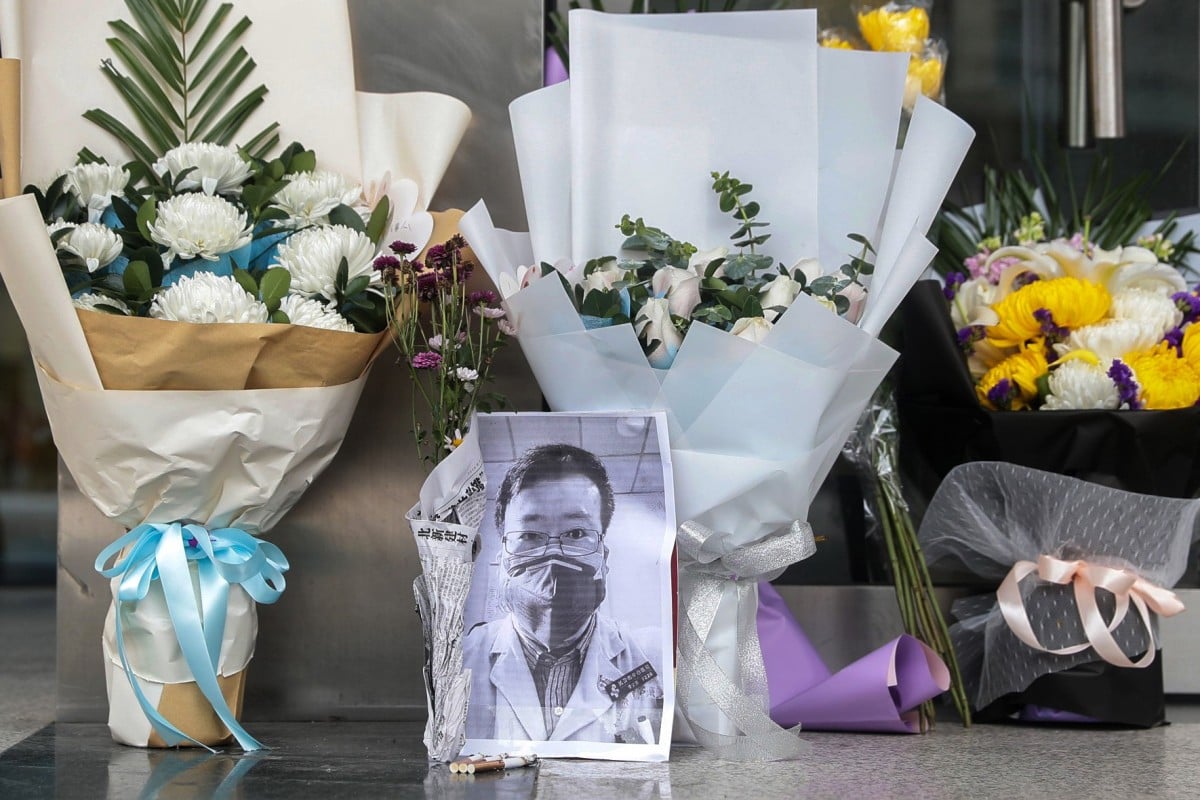 Mourners have paid tribute to

Li Wenliang, the doctor who blew the whistle on the coronavirus outbreak that began in Wuhan only to succumb to the deadly infection himself on Friday morning, with some people condemning the authorities for failing to recognise his sacrifice.

Li’s death, which shocked the nation as China struggles to cope with the pneumonia-like illness that has infected more than 31,000 people and killed 638 since December, triggered an outpouring of grief and anger at the government.

On Friday, dozens of mourners – some of them medical workers – put flowers and black-and-white photos of Li at the entrance to Wuhan Central Hospital where he worked.

Li’s condition became critical on Thursday. The hospital announced his death at about 3am on Friday morning.

“In the fight against the pneumonia epidemic of the new coronavirus infection, our hospital’s ophthalmologist, Li Wenliang, was unfortunately infected,” the hospital said on its Twitter-like Weibo account.
“He passed away after all the efforts we’ve taken to resuscitate him. We deeply mourn his passing.”

In an audio recording shared on social media, Li’s mother said that she and her husband had recovered from the infection.

“We have just been discharged but our boy didn’t make it,” she said.

Li’s wife – who is expecting the couple’s second child in June – was staying with her own mother and the couple’s five-year-old son, the doctor’s mother said.

“[Li] is a brilliant person and he would always do his duties and never tell lies,” she said.

The South China Morning Post could not authenticate the recording, and attempts to contact Li’s family were unsuccessful on Friday.

Angry comments about the official announcement of his death were also deleted, including one that read: “I’ve learned two phrases: political rescue and performative rescue.”

One social media user wrote: “I cannot continue to scroll through Weibo, I am so disappointed with the country. Everyone wears a mask and covers their mouth, but can only shed tears secretly at home as they watch the corpses lying everywhere.” 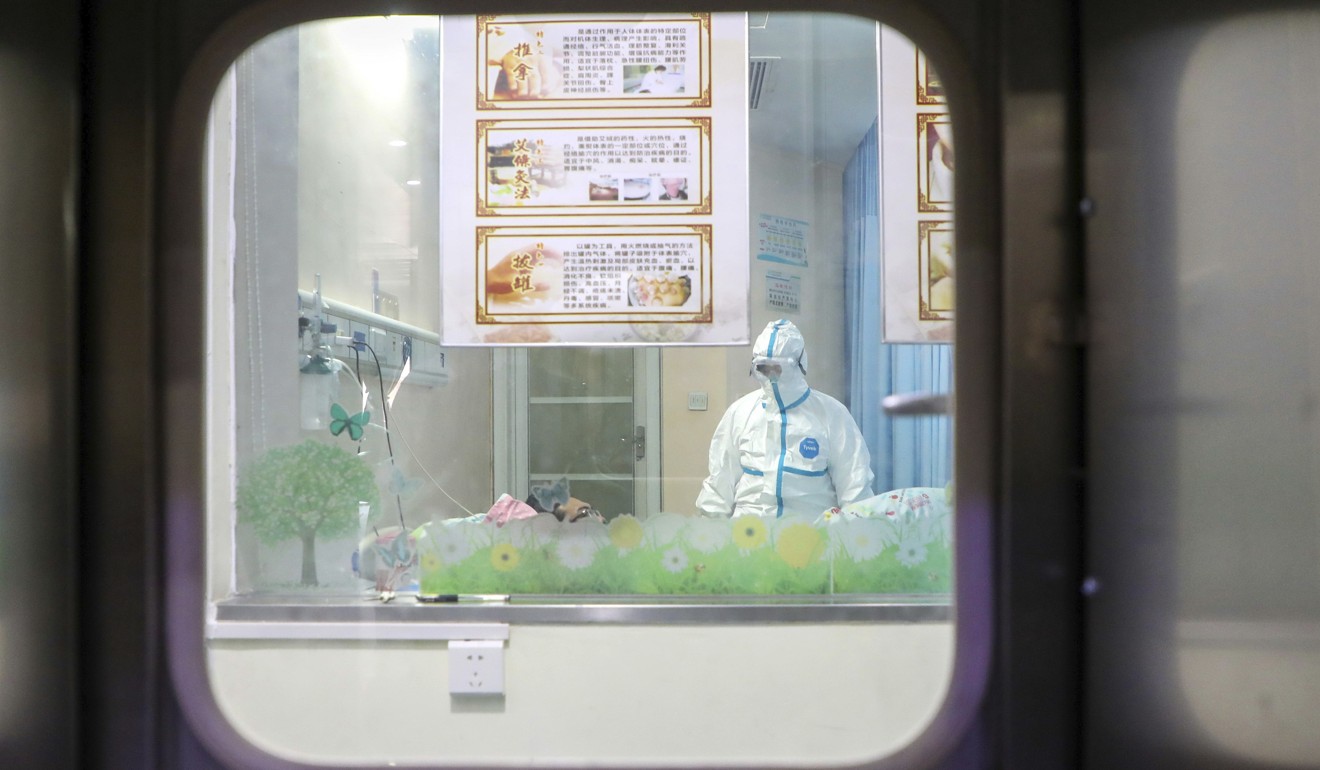 After Li Wenliang died on Friday, a hashtag appeared on social media demanding Wuhan authorities apologise to him. Photo: AP

Widely shared obituaries of Li published by Chinese media outlets, including Renwu magazine, hailed him as a martyr and an ordinary hero, who loved eating and doting on his family. Li’s Weibo posts suggested a love of gadgets and the Chinese actor and pop star Xiao Zhan.

Others posted pictures of candles, Li’s portrait, and a quote from a Caixin interview Li gave in his final days: “A healthy society should not only have one kind of voice.”

Some people shared Do You Hear the People Sing?, a song from the musical Les Miserables adopted as an anthem by protesters in Hong Kong.

The National Supervisory Commission, China’s highest anti-corruption agency, said in a statement on Friday that it was sending an investigation team to Hubei to look into Li’s death.

Meanwhile, the Wuhan government paid a belated tribute to Li, praising him for his work fighting the outbreak.

“We express our deep condolences and regrets,” it said in a statement. “We pay tribute to [Li] sticking to the front line in fighting the epidemic, and offer our sincere condolences to his family.”

Li was one of eight people disciplined by Wuhan authorities in January for “spreading rumours” after he warned a university alumni WeChat group on December 30 of a Sars-like disease that had sickened several patients then quarantined in a hospital.

The same day, local health authorities confirmed 27 cases of a new type of virus, most of them linked to a seafood market.

Li – along with seven others, including at least three doctors, who shared information about the outbreak – was summoned by police and forced to sign a letter promising to make no further disclosures about the disease.

In a Weibo post discussing how he broke the news and his interactions with the police, Li said he returned to work on January 3 after the police reprimand and a week later he started to cough.

“I was feverish on January 11 and was hospitalised the next day. Back then, the government still insisted that there was no human-to-human transmission, and said none of the medical staff had been infected. I was just confused,” he wrote on January 31.

Li was diagnosed with the coronavirus on Saturday, and shared a photo of the police reprimand letter on Weibo.

“The public security organs hope that you will be able to cooperate with our work, listen to the police’s admonishment, and from now on stop illegal activities,” it said. “Are you able to do this?”

“We hope that you can calmly self-reflect, and sternly admonish you: if you are stubborn and do not repent, and continue with your illegal activities, you will receive legal punishment. Do you understand?”

This article appeared in the South China Morning Post print edition as: Whistle-blower doctor hailed online as a martyr and hero

Laurie Chen joined the Post in 2017 after completing a master’s degree in journalism at City University, London. Originally from the UK, she studied English literature at University College London.