“The ‘Whimpering’ Terrorist Only Trump Seems to Have Heard”, The New York Times

President Trump offered a vivid account of the ISIS leader Abu Bakr al-Baghdadi “crying and screaming” in the final minutes before his death. The only problem: No one else knows what he’s talking about.

WASHINGTON — It was a vivid scene worthy of the ending of a Hollywood thriller, the image of a ruthless terrorist mastermind finally brought to justice “whimpering and crying and screaming all the way” to his death. But it may be no more true than a movie script.

In the days since President Trump gave the world a graphic account of Abu Bakr al-Baghdadi’s last minutes, no evidence has emerged to confirm it. The secretary of defense, the chairman of the Joint Chiefs of Staff and the regional commander who oversaw the operation that killed the leader of the Islamic State all say they have no idea what the president was talking about.

Four other Defense Department officials, speaking on condition of anonymity because they were not authorized to share details of the raid, said they had seen no after-action reports, situation reports or other communications that support Mr. Trump’s claim. Nor did they have any indication that Mr. Trump spoke with any of the Delta Force commandos or ground commanders in the hours between the Saturday night raid and his Sunday morning televised announcement.

One American official who was deeply familiar with the operation dismissed the president’s version of events as mere grandstanding. Another senior official briefed extensively on the mission said, “I don’t know how he would know that. It sounds like something he made up.” The surveillance drone video Mr. Trump watched in the Situation Room had no live audio.

The White House, for its part, has provided neither corroboration nor explanation of the president’s account. Stephanie Grisham, the White House press secretary, dismissed “trying to pick apart the details of the death” of the leader of the Islamic State. “Is it not possible to just celebrate that a terrorist, murderer and rapist has been killed?” she asked in an email.

Pressed on where Mr. Trump got the details he shared on national television, she said, “we are not going to get into any of the operational details of how the president receives information.” Asked if his account was true, she did not respond.

That Mr. Trump seems to have made up the scene of a whimpering terrorist may be shocking on one level yet not all that surprising from a president who over the years has made a habit of inventing people who do not exist and events that did not happen. Mr. Trump’s flexibility with fact has become such an established feature of his presidency that polls show most Americans, including even many of his own supporters, do not, as a rule, take him at his word.

What may be most telling about the episode is how little attention the disparity of details received. In the past, presidential words were scrutinized with forensic exactitude and any variance from the established record could do lasting political damage. In the era of Trumpian truth, misstatements and lies are washed away by the next story, prompting Pinocchios from fact checkers and scolding from Democrats and Never Trumpers while Republicans dismiss them with that’s-just-Trump-being-Trump weariness.

“Donald Trump is not simply a serial liar; he is attempting to murder the very idea of truth, which is even worse,” said Peter Wehner, a former strategic adviser to President George W. Bush and an outspoken critic of Mr. Trump. “Because without truth, a free society cannot operate.”

Mark K. Updegrove, a presidential historian who wrote a book about Mr. Bush and his father, President George Bush, said neither of those commanders in chief nor President Barack Obama would have been so loose with the truth about so momentous an occasion. Events like the killing of Osama bin Laden, he said, were treated with solemnity and restraint.

“In the days of reality television, humility is not enough,” said Mr. Updegrove, who is also president and chief executive of the Lyndon B. Johnson Foundation in Austin. Mr. Trump, the reality television veteran, “has to continue to add to the inherent drama of the moment, not only bragging about the despot being brought to justice but happening in the most humiliating way. He can’t help himself.”

It is certainly true that there was no mourning Mr. al-Baghdadi’s death in Washington. During his five-year reign, the Islamic State proved itself one of the most brutal terrorist organizations on the planet, establishing a murderous rule over millions while beheading and raping captured Americans.

Nor did anyone argue with the characterization of Mr. al-Baghdadi as a coward after he detonated a suicide vest with children nearby on Sunday, killing them along with himself.

But that was apparently not enough for Mr. Trump. In his announcement and subsequent question and answer session, he used the word “whimpering” six times, “crying” five times and “screaming” four times.

Mr. Trump’s account, aspects of which he repeated Friday evening at a rally in Tupelo, Miss., has left four-star generals in the awkward position of not confirming assertions they do not know to be true while trying not to contradict the president too overtly.

Defense Secretary Mark T. Esper and Gen. Mark A. Milley, chairman of the Joint Chiefs of Staff, both said they had not been told of such details, but allowed that it was possible the president had spoken with commandos involved in the operation — without explaining how that would have happened without the top civilian and military leaders of the Pentagon knowing about it.

Gen. Kenneth F. McKenzie Jr., the head of the United States Central Command who oversaw the operation in Syria, said Mr. al-Baghdadi’s last act of killing children along with himself spoke for itself. “You can deduce what kind of person it is based on that activity,” he told reporters this week.

But as for the whimpering and crying, “I’m not able to confirm anything else about his last seconds. I just can’t confirm that one way or another,” General McKenzie added. In fact, he said, “we believe Baghdadi actually may have fired from his hole in his last moments.”

Mr. Trump has always had an active imagination, on matters large and small. While in business, he called reporters pretending to be a Trump spokesman named John Barron boasting about Mr. Trump in the third person. For years, he peddled the lie that Mr. Obama was born in Kenya instead of Hawaii and he claimed to see “thousands and thousands” of Muslims in New Jersey cheering the fall of the World Trade Center on Sept. 11, 2001, a claim that was thoroughly debunked.

Mr. Trump has long cited a friend named “Jim” who supposedly told him about the decline of Paris, but news organizations have failed to ever establish Jim’s existence. While president, Mr. Trump boasted that the chief of the Boy Scouts called him to praise his speech to its jamboree and asserted that the president of Mexico called to inform him about Mr. Trump’s successful border enforcement. The White House eventually admitted that neither call took place.

Mr. Trump’s misadventures with the truth have been tabulated by The Washington Post, which has counted more than 13,000 false or misleading statements since he took office. The public is no longer surprised. In March, just 19 percent of Americans said Mr. Trump always tells the truth, according to a Reuters poll, while 40 percent said he tells the truth only sometimes and 41 percent said he never tells the truth.

That means that many of his own supporters agree that he sometimes lies.

The desire to portray Mr. al-Baghdadi in humiliating terms may stem from genuine disgust with a terrorist responsible for the deaths of so many during his five-year terror spree, including Americans James Foley, Steven Sotloff, Peter Kassig and Kayla Mueller. Mr. Trump made the point that no one should consider Mr. al-Baghdadi a hero, which is a point certainly every American official and counterterrorism expert would agree with.

Juliette Kayyem, a former assistant secretary of Homeland Security under Mr. Obama, said the president’s taunting descriptions of Mr. al-Baghdadi may not create the backlash some national security experts fear because there was no real cult surrounding the Islamic State leader that would be further radicalized.

“The real consequence,” she said, “is that because it is clearly a lie, it breeds conspiracy theories or undermines the success of the mission.”

“In other words, the impact of his gloating is more harmful to us,” she added, “and takes a winning moment that our allies needed and our enemies should fear and turns it into” a question of credibility.

And it has resulted in an unwanted headache at a Pentagon that would rather focus on the success of a mission that took the most-wanted terrorist in the world out of action. Asked this week if senior defense officials and military commanders wished the whole issue would just go away, one senior official sighed and said, “Yes, yes.” 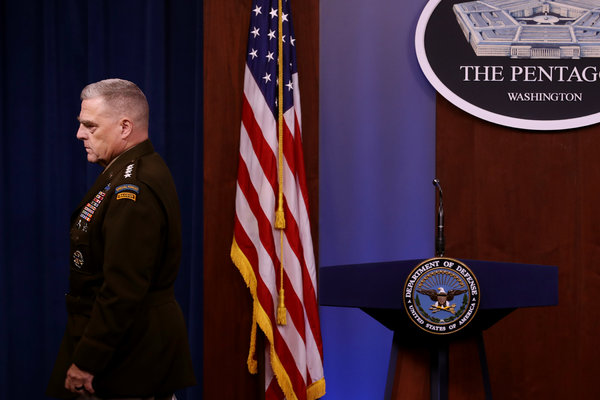 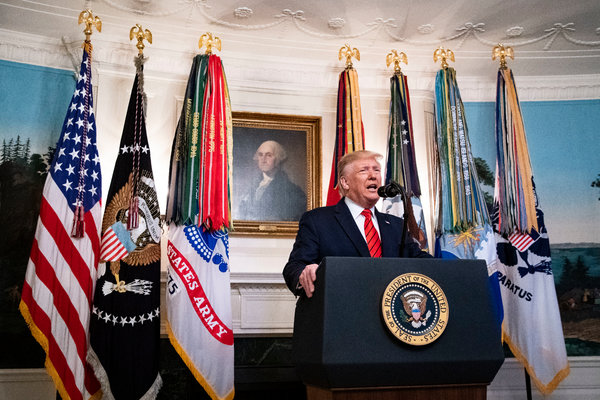 Watching the Raid Was Like a Movie, the President Said. Except There Was No Live Audio. 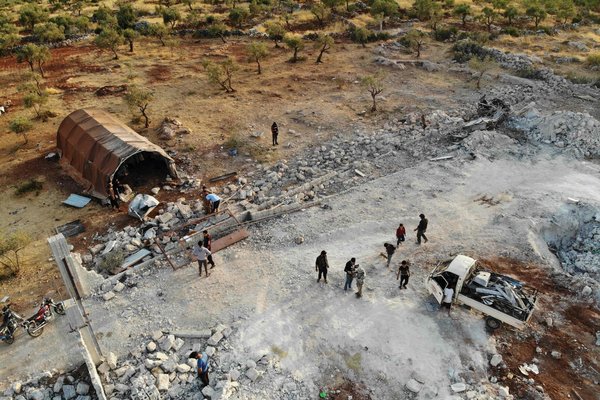 With al-Baghdadi Raid, Trump Makes the Made-for-TV Announcement He Has Long Wanted 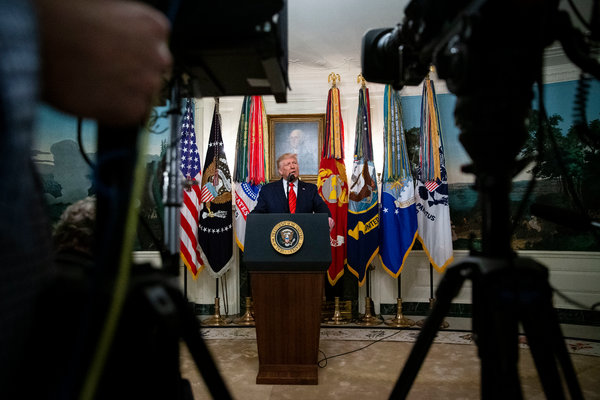 Peter Baker is the chief White House correspondent and has covered the last four presidents for The Times and The Washington Post. He also is the author of five books, most recently “Impeachment: An American History.” @peterbakernyt

Eric Schmitt is a senior writer who has traveled the world covering terrorism and national security. He was also the Pentagon correspondent. A member of the Times staff since 1983, he has shared three Pulitzer Prizes. @EricSchmittNYT