It is always a great thing to get good news on how policies can work to solve social ills. That happened tonight in a critical article (posted late tonight our time, dated tomorrow, September 11, and which will run on the front page in print on September 12) in The New York Times.

It’s another of the many Times in-depth pieces that have been so critical in a shrinking world of print journalism, where the cause, digital media, ironically depends on what it is destroying for information. Another subject, often visited by us, which will be in an ongoing way of course, because it is at the core of what we do.

The analysis found that multiple forces reduced child poverty, including lower unemployment, increased labor force participation among single mothers and the growth of state-level minimum wages. But a dominant factor was the expansion of government aid.

We have delivered the message from the start of our work that ending hunger and poverty and delivering economic security for everyone, in the US and worldwide, is provably doable. If the tax credit and income guarantees in place for some time during the pandemic had been made permanent, the rest of the job–and there’s a lot left that needs to be done–would be a long way toward being accomplished.

A quick related comment given the economic issues dominating at the moment. The relationship between costs that help people directly which also help the whole economy have no significant relationship to inflation compared to the unprecedented countless trillions spent for years to effectively underwrite all corporate debt to artificially support the entire stock market and trillions in corporate tax cuts–much less aggression threatening the entirety of global security by a nation controlling enormous energy resources others depend on and effectively drastically shrinking food supplies to feed the world. However, the issue of systemic dysfunction, inequality and unsustainability of the economic system in the US and globally, compared to times and places where balanced, common sense systemic policies have and do work, is the larger issue. We’ve covered this extensively and will more so to come.

The point related to the plunge in child poverty in the US over the past quarter century is that regardless of politics and ideology or perspective on how to interpret or characterize what has happened–everyone agrees, it has happened. In measurable ways related to specific programs and policies.

During much of the time from 1993 to 2019, one of our primary focuses has been to create the most widely viewed public service campaigns on a number of the programs, particularly supplemental nutrition programs, which are responsible for the reduction of child hunger and poverty, cited in the article.  We know how much of a difference these programs make as we received continual feedback on the difference public awareness and target group awareness made in the increase in delivery of needed services to continually more people. And in addition to reducing poverty, programs that impact the nutrition and health of mothers and children from conception through early childhood save countless lives and are key in healthy development and health outcomes, therefore life outcomes, on every level, for millions.

We support the expanding of programs snd policies proven to work until every American child and every child on the planet is fully receiving every basic need. There’s never been an excuse not to do so.

With little public notice and accelerating speed, child poverty fell by 59 percent from 1993 to 2019, according to a comprehensive new analysis that shows the critical role of increased government aid.

For this article, the reporter worked closely for five months with researchers from a nonpartisan group to document the decline in child poverty and the forces pushing it lower.

WASHINGTON — For a generation or more, America’s high levels of child poverty set it apart from other rich nations, leaving millions of young people lacking support as basic as food and shelter amid mounting evidence that early hardship leaves children poorer, sicker and less educated as adults.

But with little public notice and accelerating speed, America’s children have become much less poor.

A comprehensive new analysis shows that child poverty has fallen 59 percent since 1993, with need receding on nearly every front. Child poverty has fallen in every state, and it has fallen by about the same degree among children who are white, Black, Hispanic and Asian, living with one parent or two, and in native or immigrant households. Deep poverty, a form of especially severe deprivation, has fallen nearly as much.

In 1993, nearly 28 percent of children were poor, meaning their households lacked the income the government deemed necessary to meet basic needs. By 2019, before temporary pandemic aid drove it even lower, child poverty had fallen to about 11 percent.

More than eight million children remained in poverty, and despite shared progress, Black and Latino children are about three times as likely as white children to be poor. With the poverty line low (about $29,000 for a family of four in a place with typical living costs), many families who escape poverty in the statistical sense still experience hardship.

Still, the sharp retreat of child poverty represents major progress and has drawn surprisingly little notice, even among policy experts.

It has coincided with profound changes to the safety net, which at once became more stringent and more generous. Starting in the 1990s, tough welfare laws shrank cash aid to parents without jobs. But other subsidies grew, especially for working families, and total federal spending on low-income children roughly doubled.

To examine the drop in child poverty, The New York Times collaborated with Child Trends, a nonpartisan research group with an expertise in statistical analysis. The joint project relied on the data the Census Bureau uses to calculate poverty rates but examined it over more years and in greater demographic detail.

The analysis found that multiple forces reduced child poverty, including lower unemployment, increased labor force participation among single mothers and the growth of state-level minimum wages. But a dominant factor was the expansion of government aid.

“This is an astounding decline in child poverty,” said Dana Thomson, a co-author of the Child Trends study. “Its magnitude is unequaled in the history of poverty measurement, and the single largest explanation is the growth of the safety net.”

Renee Ryberg, another co-author, said the poverty reduction offered millions of children greater prospects of success. “A childhood free of poverty predicts better adult outcomes in just about every area you can imagine, including education, earnings and health,” she said.

The analysis excluded 2020, the most recent year for which data is available, because pandemic aid made it unrepresentative. Including it makes the decline since 1993 even greater, at 69 percent.

The plunge in child poverty is the opposite of what most liberal experts predicted a quarter-century ago when President Bill Clinton signed a law from a Republican Congress to “end welfare as we know it.”

Conservatives say the landmark law pushed more parents to work and call it the main reason child poverty declined. Progressives say many working families would still be poor without the expanded safety net, which grew in part to compensate for stagnant wages amid decades of rising inequality. 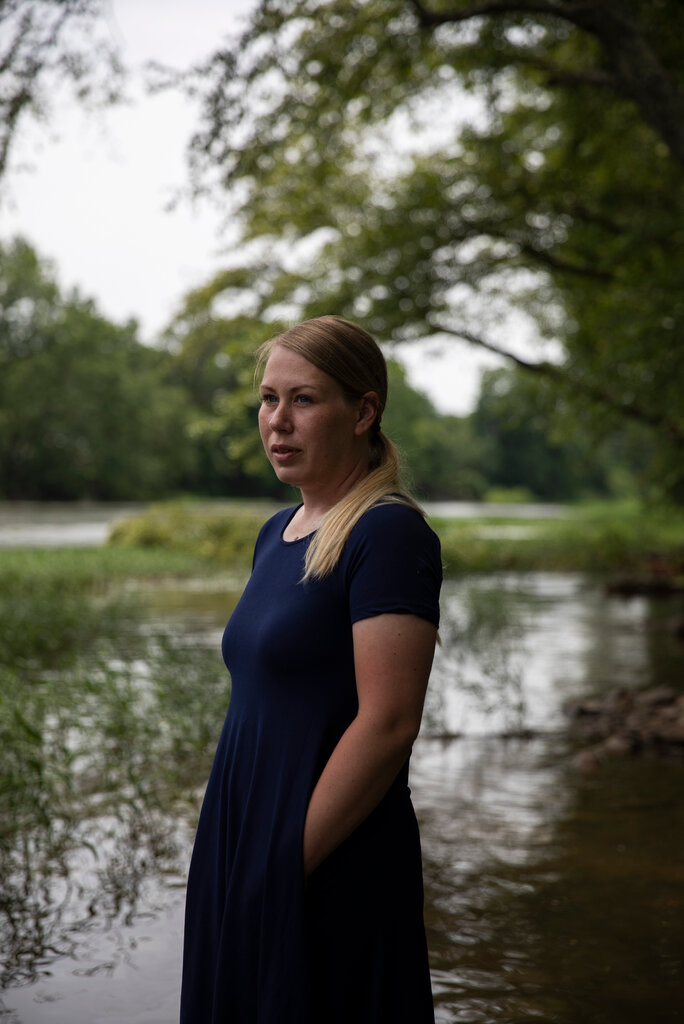 C“I I I wouldn’t say poor but definitely not middle class — we’re below that. I don’t know what the definition of poor is. We have a roof over our head. But if my car breaks down, we’re not going to have a car for a while because we can’t pay for it. So I guess I am poor.” Stacy Tallman

A patchwork of programs shaped by a century of political conflict and compromise, the safety net bears the imprint of both parties and commands the satisfaction of neither. Most Republicans want less spending, more local control and more rules requiring beneficiaries to work. Most Democrats want higher benefits for more people, as seen in their unsuccessful push this year to permanently turn the child tax credit, a workers’ subsidy, into a broader income guarantee.

Critics of all sorts, including those getting aid, complain of red tape.

Yet whatever its flaws, the safety net depicted in the Child Trends data lifts a record share of children from poverty. “The federal government declared war on poverty, and poverty won,” President Ronald Reagan said a generation ago. With child poverty at a record low, that narrative of defeat appears obsolete.

“This decline in child poverty is very significant. I cannot say it enough,” said Dolores Acevedo-Garcia, a poverty expert at Brandeis University who reviewed the data. “If we still had the rates as we had in the 1990s, there would be 12 million more children in poverty.”

To see how the safety net protects children, consider the experience of Stacy Tallman, a mother of three in Marlinton, W.Va., who was working as a waitress last year when her teenage son, Jakob, suffered serious injuries in a car accident. Both Ms. Tallman and her partner, who has a maintenance job, missed work to care for him, and their income fell by about a quarter to $36,000.

After payroll taxes and other expenses the government takes into account when measuring poverty, their income was just below the poverty line. But the safety net delivered more than $16,000, not counting pandemic assistance. That included $8,000 in refundable tax credits and $6,500 from the Supplemental Nutrition Assistance Program, or food stamps.

Asked what difference SNAP made, Ms. Raudales recited the bonanza of fruit she buys, then resorted to a Honduran idiom — literally, “we’re breathing” — that translates colloquially as “we’re able to get by.”

“Before I had the SNAP, I was always afraid,” she said. “Now it’s like if something happens, we’ll be OK.”

In 1993, 49 percent of Black children and 52 percent of Hispanic children were poor — figures that now look like misprints. While poverty among both groups has plunged, gaps with white children remain.

“The decline in child poverty deserves to be lauded, but these disparities diminish the sense of progress,” said Starsky Wilson, the president of the Children’s Defense Fund.

Likewise, poverty fell at equal rates among immigrant and nonimmigrant households, but the children of foreign-born parents were almost twice as likely to be poor. That is partly because they have less access to aid. Most programs deny aid to undocumented migrants, and some restrict certain legal immigrants, too.

“They are here to stay,” she said.

Despite its progress, the United States still has more child poverty than many peer nations, though its rank depends on how poverty is defined.

The United States looks better in comparisons that use the American poverty line as a common standard. Yet even with that definition, the National Academies of Sciences, Engineering, and Medicine in 2019 found the United States ranked fourth among five rich English-speaking countries, trailing Australia, Canada and Ireland.

“We could do a lot better,” said Hilary Hoynes, an economist at the University of California, Berkeley, though she hailed the progress as evidence that solutions can be found.