“The Munich massacre, 50 years on”, The Boston Globe

In 1972, the Israeli athletes went home in coffins and the world went back to its games. 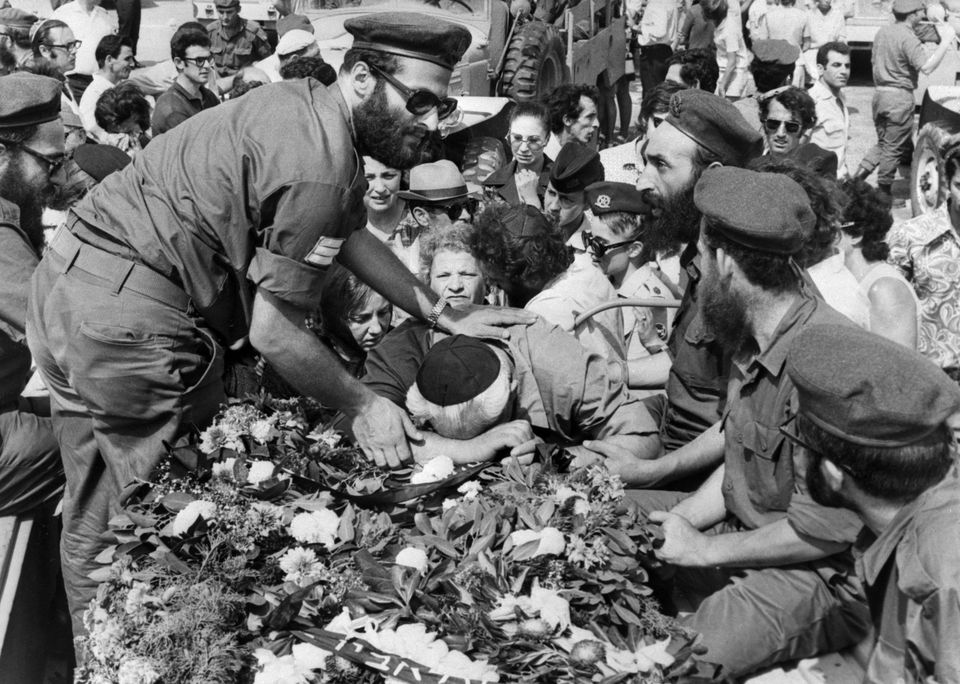 Family members cry during the funeral of a member of the Israeli Olympic team killed in the Palestinian attack in September 1972.-/AFP VIA GETTY IMAGES

Next week marks the 50th anniversary of the worst atrocity in Olympic history — the day Palestinian terrorists invaded the Olympic Games in Munich and murdered 11 Israeli athletes.

The 1972 Olympics were the first to be held in Germany since the infamous Berlin Games of 1936, which took place under Nazi supervision. The (West) German government was eager to show the world how things had changed in 36 years and, to emphasize the ease and freedom of the new Germany, security was kept to a minimum. There was no hint of barbed wire, troops, or heavily armed police. Intent on promoting the Munich Olympics as “the Carefree Games,” officials made little effort to restrict access to the athletes’ village; anyone lacking an ID could simply climb the chain link fence.

Which is what eight Black September terrorists from the Palestine Liberation Organization’s Fatah faction did early on the morning of Tuesday, Sept. 5.

Armed with grenades and Kalashnikov rifles, the terrorists forced their way to the Israeli team’s quarters. Two of the Israelis were killed on the spot; the body of one was grotesquely mutilated. Nine others were taken hostage. The terrorists demanded the release of 234 prisoners held by Israel and insisted that Germany free the founders of the Baader-Meinhof Gang, a far-left terror group responsible for numerous assassinations and bombings.

“When the release did not materialize by the late afternoon, the terrorists demanded a plane to take them to Egypt,” recounted historian Deborah Lipstadt in a 2012 essay. German officials agreed, planning to ambush the gunmen at the airport. But the ambush was completely botched.

“A team of German police assigned to entrap the terrorists walked off the job,” Lipstadt wrote. “There were more terrorists than German snipers — and the snipers could not communicate with each other or with the officials in charge. Armored cars, which were ordered for backup, got caught in an hour-long traffic jam around the airport.

“A gun battle erupted between the German forces and the terrorists on the tarmac, and the athletes, whom the captors had bound one to another in the helicopters that had brought them to the airport, were caught in the middle. When the terrorists realized that they could not escape, they shot the hostages and then threw a grenade into the helicopters to ensure that they were dead.”

Not until 4 in the afternoon, 12 hours after the terrorist attack had begun, did Avery Brundage, the International Olympic Committee chairman, finally suspend competition for the day and announce a memorial service for the next morning. But at the Olympic stadium on Wednesday, Brundage spoke only a single sentence about the Jews who had been slaughtered. “We mourn our Israeli friends, victims of this brutal assault.” Then he segued into a complaint about how “commercial, political, and now criminal pressure” was sullying the purity of the Olympic Games. Astonishingly, he described the murder of the 11 Israelis as the second of “two savage attacks” the Munich Games had endured. The first, in his telling, was the decision by the IOC to exclude athletes from white-ruled Rhodesia, a decision Brundage had opposed.

When Brundage declared that the Games would not be canceled but would instead resume the next day, there was little pushback. Among the few who expressed disgust was Red Smith, The New York Times sportswriter:

“This time surely, some thought, they would cover the sandbox and put the blocks aside,” Smith wrote in a column that appeared the next day. “But no. ‘The Games must go on,’ said Avery Brundage, high priest of the playground, and 80,000 listeners burst into applause. The occasion was yesterday’s memorial service for 11 members of Israel’s Olympic delegation murdered by Palestinian terrorists. It was more like a pep rally.”

In the end, the surviving members of the Israeli squad returned home, accompanying the coffins of their murdered teammates. In Munich, all signs of distress were quickly obliterated. German Chancellor Willy Brandt had asked the participating countries to fly their flags at half-mast as a sign of sorrow and respect. But when 10 Arab nations objected, the request was rescinded.

For decades the families of the murdered Israelis repeatedly asked that their loved ones be remembered with a moment of silence at the start of a subsequent Olympic Games. For decades the International Olympic Committee refused, insisting that it would be wrong to allow politics to intrude on what should be an international celebration of athletic brother- and sisterhood. That was a transparently phony excuse. It was the massacre that had so brutally undermined the ideal of global solidarity. It only compounded that brutality that the families’ humble request for a brief remembrance was repeatedly denied.

Not until last summer, when the pandemic-delayed 2020 Olympics opened in a half-empty stadium in Tokyo, were the murdered Israeli athletes finally remembered with a moment of silence. It had been 49 years.

Meanwhile, the terrorists who carried out the horror continue to be honored and celebrated by the Palestinian Authority.

During a visit to Germany this month, Mahmoud Abbas, the Palestinian Authority president, was asked by a reporter if he intended to express regret for the barbaric events of 1972. Far from apologizing, Abbas, standing next to German Chancellor Olaf Scholz, accused Israel of committing “50 Holocausts” against Palestinians — a falsehood so ugly that Scholz said it “disgusted” him.

Abbas will never repudiate the 1972 slaughter, not least because it was carried out on behalf of Fatah, the Palestinian faction that he has long headed. According to Abu Daoud, the Palestinian mastermind who organized the Munich atrocity, Abbas was the senior Fatah official responsible for financing the operation. In the half-century since the terrorists invaded the Olympics, the Palestinian Authority and Fatah have consistently portrayed their actions as noble and heroic.

As recently as June, a member of the Fatah Central Committee, Tawfiq Tirawi, posted an encomium to the Black September terrorists, identifying them as “heroes of the Munich operation.” In 2021, the Palestinian Authority’s official news program aired footage of three of the killers, hailing the “pride, glory, and loyalty” they represented. In a TV broadcast three years earlier, the “self-sacrificing fighters” were extolled for having “stunned the world and made it hold its breath for more than 12 hours in Munich.”

These are the role models that Abbas and the Palestinian Authority teach their followers to admire — not doctors, poets, scientists, or even athletes, but murderers. For half a century, the Palestinian Authority has reinforced its message of pride in the savagery of 1972. Fifty years that could have been devoted to building up the infrastructure of a Palestinian state, 50 years during which any of Israel’s repeated overtures for peace could have been embraced, have been used instead to entrench the same hatred that Palestinian leaders espoused in 1972.

Because of that hatred, 11 Jewish athletes died 50 years ago next week before the eyes of a world that barely paused before resuming its games. Their names were David Berger, Ze’ev Friedman, Yosef Gutfreund, Eliezer Halfin, Yosef Romano, Amitzur Shapira, Kehat Shorr, Mark Slavin, Andre Spitzer, Yakov Springer, and Moshe Weinberg. May their memories be a blessing.

Jeff Jacoby is a Globe columnist. He can be reached at jeff.jacoby@globe.com. Follow him on Twitter @jeff_jacoby. This column is excerpted from the current issue of Arguable, his weekly newsletter. To subscribe to Arguable, visit bitly.com/Arguable.