New Delhi (CNN)India’s Prime Minister Narendra Modi said Friday he would repeal three contentious agricultural laws that sparked more than a year of protests, in a rare apparent climb down ahead of pivotal state elections. 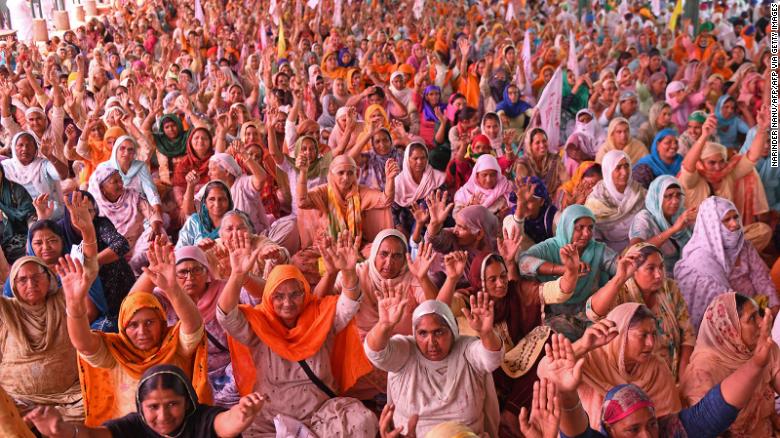 Farmers take part in a protest against the central government’s agricultural reforms in Amritsar on April 18, 2021.

“Today I have come to tell you, the whole country, that we have decided to withdraw all three agricultural laws,” Modi said in an address to the nation, adding the process will be completed in a parliamentary session later this month.

Modi acknowledged the importance of farmers and the challenges they have faced. He said it was a priority issue for his ruling Bharatiya Janata Party (BJP).

“In this great campaign to improve the condition of the farmers, three agricultural laws were brought in the country,” Modi said.

“This law was brought in with good intentions,” he continued, adding that despite its efforts, the government was unable to “make them (farmers) understand the importance of the agricultural laws.”

National vice president of the Jai Kisan Andolan farmers’ group, Deepak Lamba, said Modi’s announcement “can be seen as a huge victory for farmers,” but added the government has repealed the laws for “political compulsions.”

“The government has taken this step, keeping in mind upcoming (state) elections,” he said.

In India, farming is a central political issue, and the protests posed a unique challenge to the BJP.

Farmers are the biggest voting bloc in the country, and the agricultural sector sustains about 58% of India’s 1.3 billion citizens. Angering farmers could see Modi lose a sizable number of votes.

“The timing indicates there is an electoral motive,” he said. “These farm laws have been repealed after a year of protest in which farmers have been through all manner of hardship (including) the cold, the heat, pollution … violence, and, at times, state repression.”

Farmers among 8 killed as India protest erupts in violence

Modi’s announcement came on Gur Purab, the birth anniversary of the founder of the Sikh faith, Guru Nanak. Sikhism is the dominant religion in the northern state of Punjab, which is governed by the opposition Congress Party and is considered India’s bread basket for its large agricultural force.

However, some farmer groups vowed to maintain the pressure.

“The protests will not be withdrawn immediately,” Indian Farmers’ Union leader Rakesh Tikait wrote on Twitter.

“We will wait for the day when agricultural laws will be repealed in Parliament.”

The Samyukt Kisan Morcha farmers’ group welcomed the repeal of what they described as “anti-farmer, pro-corporate black laws,” in a statement Friday, but said it would also wait for the announcement to take effect in Parliament.

“If this happens, it will be a historic victory of the one year long farmers’ struggle in India,” the group said.

For more than a year, Indian farmers have fought the three laws, which they said leave them open to exploitation by large corporations and could destroy their livelihoods. The laws, which were passed last September, loosened rules around the sale and pricing of produce that have protected farmers from an unregulated free market for decades.

Under the previous laws, farmers had to sell their goods at auction at their state’s Agricultural Produce Market Committee, where they were guaranteed to receive at least the government-agreed minimum price. There were restrictions on who could buy, and prices were capped for essential commodities.

The new laws dismantled this structure, instead allowing farmers to sell their goods to anyone for any price. The government said the reforms were needed to modernize the country’s agricultural industry, but many farmers argued they would allow large corporations to drive prices down.

In mid-January, India’s Supreme Court temporarily suspended the laws. But Modi failed to quell the protests, with some farmers vowing not to leave until the laws were fully repealed.

According to Verniers from Ashoka University, it would be difficult for Modi “to sell (the repeal) as a benevolent gesture.” The decision was also likely to anger some of the Prime Minister’s supporters, he added.

“They’re not used to seeing their leaders backtrack on policy decisions,” Verniers said.